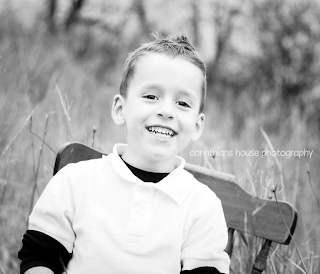 July 26 started as any normal day. Well that was until Landon decided to make it more exciting because without any warning and while standing in the middle of the hallway at work, my water broke. I was 32 weeks and 5 days along. I called my very shocked husband and the doctor's office to notify them what had happened. Needless to say, I don't think either believed me and they were just hoping that I had just had an accident but that was not the case.

Once I arrived at the hospital, I was immediately given a steroid injection to help Landon's lungs develop. I was told that everyone was hoping that I could make it at least 24 or more hours before Landon was born so that another steroid shot could be given. Up to this point I felt like I was in a whirlwind without any control over my situation, but suddenly I had a new focus. My goal was to make it those 24 hours so that I could receive the next steroid shot and give our baby a better chance. Those several hours spent in the hospital waiting gave my husband and I time to discuss this unexpected process. We were very excited about meeting our sweet baby boy but also so very scared with what the future would hold by having a premature baby. Whatever was ahead we knew that we would just deal with it one day at a time. I met that goal of holding off 24 hours and some would say we blew that out of the water (or maybe I should say Landon put the brakes on). 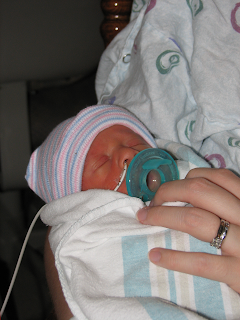 On July 28, 2007, forty seven hours after my water broke and at 33 weeks gestation, Landon graced us with his beautiful presence in this world. He weighed 4 lbs 3 oz and was 17 3/4 inches. He made such a grand entrance that morning that when the doctor asked what his handle was. We replied Landon Connor but the doctor responded with, "I think you might want to consider calling this one Landon Running because he’s going to be up and running in no time." Little did that doctor know that his small gesture of humor in such a scary situation meant the world to us overwhelmed new parents. Landon was born at Willow Creek Women's Hospital but received his first ambulance ride at about hour old when he was transferred to the Springdale NICU.


As a new mommy that had just had her baby whisked away, I suddenly felt helpless again and lonely in a different kind of way. I was no longer carrying or able to protect my baby. I was stuck in the hospital trying to recover myself but all I wanted was to be with him. From the day I found out I was pregnant I had imagined the day my baby would be born. I pictured him being laid on my chest after birth and then soon being able to hold and kiss him. But I had just quickly realized that was all a dream. My new baby being rushed off to be cared for by specialists is what most mothers with premature babies experience. I had to except that I was now a mommy to a preemie. 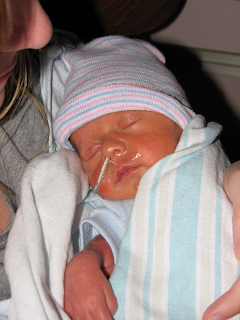 Landon did well early on with his transition to life outside the womb. He only had to be on oxygen via nasal cannula for the first day or two and then was quickly weaned onto room air. He was able to hold his body temperature within the first few days. This was very exciting for us because we were then able to put him in clothes (very big clothes but clothes nonetheless). He did develop a significant case of jaundice and had to be exposed to UV lights several hours a day but we found the positive in this and would say he was working on his tan. We only had one more goal that we were aware of and that was him eating on his own. With all this great progress we just assumed that we were going to be bringing Landon home in a matter of days. We should have known not to get ahead of ourselves because as most NICU parents know, get ready for the ups and downs because they do exist.

After only a week or so in the NICU, we were told that Landon was ready to tackle this last step before going home. He had to learn to either nurse or bottle feed. Together we decided we wanted to do whatever would get him home sooner so the nurses suggested bottle feed using breast milk so that I could continue to pump. They cautioned me that little Caucasian boys have a harder time with the task of sucking and swallowing so not to be disappointed if it didn't happen overnight. Boy was that an understatement. 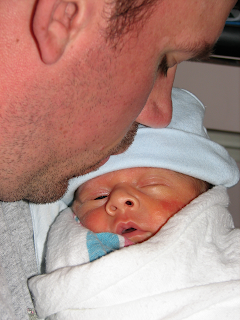 My husband and I were also pulled aside at that visit and told Landon had his head ultrasound earlier in that day and that we needed to discuss the results. We were told that babies born prematurely often have weak blood vessels in their brain and that the birthing process can break those fragile vessels. When I heard those words, I felt like I was suddenly in an out of body experience. I can personally remember my mind racing and thinking I did not want to hear the rest of what the doctor had to say. This was followed by Landon had a small brain bleed graded at a 1+ (on a scale of 0-4). They were happy that it was not a very critical portion of the brain and that it was overall considered minor. It would need to be rechecked in a few months to determine if it had dissolved or not. However, there was nothing about that whole conversation we had just experienced that included the words premature baby, brain, and bleeding that we as a parents could except as minor. We did all we could to keep it together in the NICU around the other parents but I will never forget the moment we walked out of that room. Holding my husband's hand were both suddenly overwhelmed with all kinds of emotions. Our tears began to fall and wouldn't stop for some time.

Somehow with the help of prayers and the hand of God we pushed forward knowing our reward was to one day have our beautiful son home with us on his schedule not ours. My husband and I made several trips a day to the NICU and we would call every night between midnight and 2 am to check on him. It amazed us how quickly this became our routine. Another part of our daily routine was to read bedtime stories at the NICU. We always took a few books in every evening to read to Landon or any of the sweet babies that wanted to listen. However "I Love You Through and Through", "Hokey Pokey Elmo" and "Gerald McBoing Boing" definitely topped our list. My husband and I also would almost fight over whose turn it was to change Landon's diaper but many times we would just decide to do it together. We took turns getting him ready for feedings or attempting to get him to take a bottle. While having a NICU baby was difficult on us both, we always tried to remember that we needed to stick together and experience this ever changing journey as a couple and as Landon's parents. 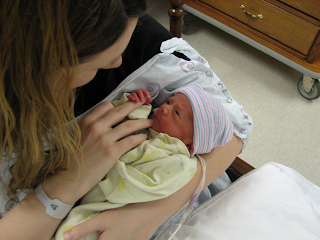 Weeks seemed to pass and we still had not seen much progress on the bottle feedings. Finally speech therapy was called in to help him with technique for feedings but still very little progress seemed to occur. We would try not to get discouraged but it just got harder and harder with easy passing day. Then early on in week 3, we had another big scare. It was right before a tube feeding when the nurse came by to do a routine check of Landon's remaining stomach contents before his next feeding. She suctioned off a large amount of reddish-black content. We had been through normal enough times that we knew this was bad. The look on her face only confirmed our fears. He had blood in his stomach. We were told only time would tell if he had gastrointestinal bleeding or if his stomach wall had been irritated. He had to be watched very closely at every feeding over the next 24 hours. My husband and I were at every feeding we could possibly make and if we couldn't be there we were calling to check his status at those 4 hour intervals. After the next day of feedings he had been fairly clear. It was determined that his feeding tube had stuck to the wall of his stomach which caused irritation and bleeding but was not expected to cause any long term complications. This event made us realize again that we had been truly blessed. We decided it was time to stop worrying and time to get focused on the positive and the things we could control. We were determined to help Landon learn how to take a bottle. We drove up to the hospital every 4 hours to personally do every feeding (except the one feeding in the middle of the night but we did call to check on him). It took 3 days but it worked. Landon started taking the bottle a whopping 40 mL at a time.

On August 25th, exactly 4 weeks after he was born we were able to bring our precious Landon home. What a glorious day. We both felt like we could yell from roof tops but that first night home it hit us. He was no longer hooked up to monitors. We started wondering… what if something happens? What if we don't know what to do? The first few nights he was home we got very little sleep. It was not because he kept us up but because we had to keep checking on him to make sure he was still ok. As more and more days passed the easier it got to care for our baby without fear of the ever changing roller coaster NICU days. Eventually 5 more months had passed and Landon had a repeat head ultrasound and no signs of any remaining brain hemorrhage were found. We had finally closed out many of our fears.

We have continued to move forward but with fond memories of Landon’s early entrance into the world, his NICU days, and the friendships we found along the way all because of our sweet premature babies.

If we have any advice to offer others going through this situation it is to remember that there will be ups and downs but to always try to focus on the positive and form bonds with others in your similar situation because they do understand. Last but not least, put your faith in God. He will see you through your most difficult hours. 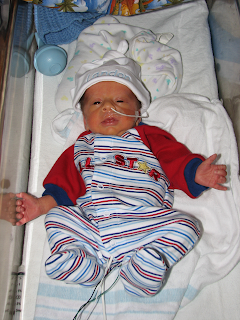 We would like to say thank you to the Hummingbird Foundation for allowing us to tell our story and for helping all the precious little ones gracing the world with their presence earlier than expected too.

Landon’s mommy and daddy
(Kelli and Michael)
Posted by Tiny Hummingbirds at 9:32 PM