Meet Brennen!
He is our sweet model for the month of July in our Hummingbird Calendars! 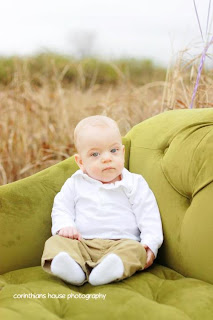 Brennen Michael was born March 26, 2011; he was due June 27, 2011. On March 22, at midnight, I had sharp pains in my side so I got up out of bed and walked around a little bit to see if the pain would go away, it didn’t. So, I decided to go to the restroom and then try to go back to sleep. When I went to the restroom my water broke. I was in such shock I started crying, pretty much in total denial of what was really going on. “My water could not have broken. I am only 26 weeks pregnant!” I thought.

Colin, my husband, woke up because I was crying so hard. I told him a lot of water just came out and I don’t know if it is urine or not, so we went to the ER. After we got there, the nurses took measures to stop my labor. The doctor said that my water had broken due to PROM (Premature Rupture of Membranes). The doctor informed us that their hospital was not capable of caring for babies born before 28 weeks so Angel One (Arkansas Children’s Hospital’s Helicopter) was coming to airlift me to UAMS in Little Rock.

Completely overwhelmed by this whole situation, I cried out: “This is a nightmare!” I have never known anyone to have a premature baby. Until this point, my pregnancy was going perfect. I was doing all of the right things. I had no illnesses and no problems whatsoever! Why is this happening?

I arrive in Little Rock and get situated. The doctor tells me that my labor has stopped, but I will still continue to leak amniotic fluid until the baby is born. However, the good news is that I will continue to make more fluid. If everything had gone as planned, I would have stayed there and delivered at 34 weeks. The Neonatologists wanted to keep the baby in as long as possible. So, I get situated in a room and everything is going fine. I was told by one of the nurses that if you make it past 48 hours, then you should make it to 34 weeks.

On day number 4, I woke up and went to the restroom and noticed that I was bleeding a little bit. I called the nurse to let them know I was bleeding and she called the doctor to come and check me. When the doctor checked me, she discovered that I was 6 cm dilated and I was having Umbilical cord prolapse. Umbilical cord prolapse is where the umbilical cord enters the vaginal canal before the fetus. This is very rare, but is a risk factor for people who have PROM, and can pose a serious danger for the baby.

The doctor tells me that I am going to have an emergency c-section right now. At UAMS, the doctors and nurses have special radio devices called Voceras that they use to communicate with each other. Several nurses were called by Vocera into the room and they wheeled me off to surgery. The doctor had to ride on the hospital bed with me and hold Brennen’s umbilical cord and foot in so that the cord would not be flatted in the vaginal canal, potentially causing brain damage or death.

At 26 weeks, 6 days, via emergency c-section, our tiny miracle child was born. Brennen Michael Furrow was born March 26, 2011, 7:41am, 2lbs. 2oz. 14 inches long. Brennen was a fighter from the beginning. He cried when the doctor delivered him. He was only on the ventilator for 45min- 1hour after he was born. Brennen had what the doctors called a “boring NICU stay”. I attribute a lot of his health and strength to the grace of God, prayer, and breast milk.

The first time I got to hold him he was three days old. I remember being nervous because he was so small and there were so many wires. One of the hardest things for me was asking to touch or hold my baby. He was allowed to have Kangaroo Care for an hour every day and I definitely took advantage of that. Kangaroo Care is where the baby has skin to skin snuggle time with mommy or daddy. Studies have shown that premature babies tend to develop better when they have Kangaroo Care, if they are allowed to be held.

UAMS was a fantastic hospital with excellent doctors and nurses. Colin and I were always very included on all of the discussions on Brennen’s care and health. I always got to change his diaper and help with his baths. There were always good and bad days with the bradycardia events (bradys) and desaturations in oxygen (desats). We only had one “major” hiccup in regards to desaturation in oxygen. Brennen was having excessive desats and had to be on a CPAP machine (continuous positive airway pressure) for a few days. I was told that it was a like a nasal cannula but it had longer nasal prongs with pressurized air to help him breathe and get the oxygen he needed.

At 7 weeks old (33 weeks gestation) Brennen was able to move into an open air crib and they took away the nasal cannula. He was doing wonderful, so we were moved to the Stork’s Nest which is the step down unit at UAMS for babies who are learning to eat and getting ready to go home. We had another set back after being there for only 2 days. Brennen started having excessive desats and he had to go back on the nasal cannula. He was moved back to the more critical care area of the NICU for 2 more weeks so he could have more attention from the nurses.

In those 2 weeks Brennen regained strength and we were able to move back to the Stork’s Nest and begin breastfeeding. I was bound and determined to nurse him so I worked very hard with the nurses and lactation consultants to help him learn to nurse. While in the Stork’s Nest, Brennen prospered, grew, and got stronger every day! I was able to hold him whenever I wanted, change his clothes, and do all of his care like a mother should be able to do.

After 84 days in the NICU, on June 18, 2011 we were able to bring home our 6lb. 11oz, healthy baby boy! Brennen is such a wonderful, beautiful, and smart child. Colin and I are so blessed to be his parents and he brings joy and a smile to everyone he meets. I want to take a special moment to also thank God for my sweet friend, Holly Walker. We were next door neighbors in the critical care wing and in the step down wing of the NICU. Holly and I met through a mutual friend just a couple of weeks before both Brennen and Emry were born (5 days apart) at UAMS. I am positive God allowed us to meet before our kids were born so we would have each other in one of the most difficult times in our lives. I still thank God all of the time for our friendship.

Thank you for allowing our family to be part of such a wonderful organization. We hope and pray that the Hummingbird Foundation is able reach out and are a blessing to many families for years to come. All in the name of Jesus!

Posted by Tiny Hummingbirds at 4:08 PM